A road network master plan has been formulated for the Osaka-Kobe area, which calls for the separation of inter and intra-city traffic according to the specific characteristics of each city to ensure more vital urban activities and a more comfortable living environment for each area's citizens.

This planned route consists of a part of Osaka Wangan Expressway Project and the 14.5km long expressway construction project.
The route will reduce the traffic volume in Hanshin waterfront area and ease the traffic problems such as congestion, roadside environment and so on. It is also intended to make logistics more efficient by functional enhancement of Hanshin Port, one of the international strategic ports (super hub ports), and get the alternate function in emergencies as disasters and accidents.

This planned route consists of a part of Osaka Urban Renaissance Loop Route Project and the 8.7km long expressway construction project. As part of Hanshin Expressway is 7.6km long.
The route will be linked to Daini-Keihan Road, so makes the connection between the Osaka Bay Area (The area of Hanshin Port, Yumeshima and Sakishima) and the major expressways such as Meishin Expressway. It is also intended to contribute significantly to the economic invigoration and competitive enhancement of the Kansai Metropolitan Area by the logistics efficiency and the powerful expressway network, and the support of evacuation and rescue activities in case of disasters. 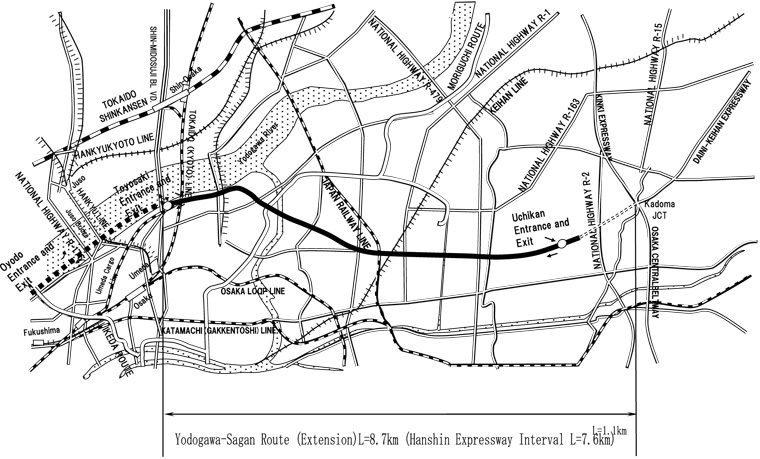 Yodogawa-Sagan Route is a 10.0km access-controlled motorway connecting with the Route 5 (Wangan Route) at Hokko Junction and Route 3 (Kobe Route) at Ebie Junction (1st phase), and extending to Shin-Midosuji Avenue (2nd phase). The 1st phase was completed in 2013. Some sections of this route will be built under a joint-project scheme including such public facilities as parks and sewage systems.
This construction project is being carried out in a heavily urban environment which includes residential areas, and underground pipes for gas, electricity and water. Such pipe lines were temporarily moved and tunnel work was carried out.

The Yamatogawa Route is a 9.7km expressway linking Route4 (Wangan Route) and Route14 (Matsubara Route). As part of the Osaka Urban Renewal Loop Route Project, it directly links the coastal area of southern Osaka to inland areas. The construction of the route is intended to reduce traffic congestion on the local streets and traffic volume on several routes of the Hanshin Expressway. It will contribute significantly to the vitality of the Kansai metropolitan area.
The Yamatogawa Route is designed with consideration for the roadside environment, the safety of traveling vehicles and integration into related roads and roadside land use. This route consists of underground structure in residential areas and trench structure in industrial areas. Osaka Prefecture, Sakai City, and Hanshin Expressway have jointly undertaken this project since 2006.